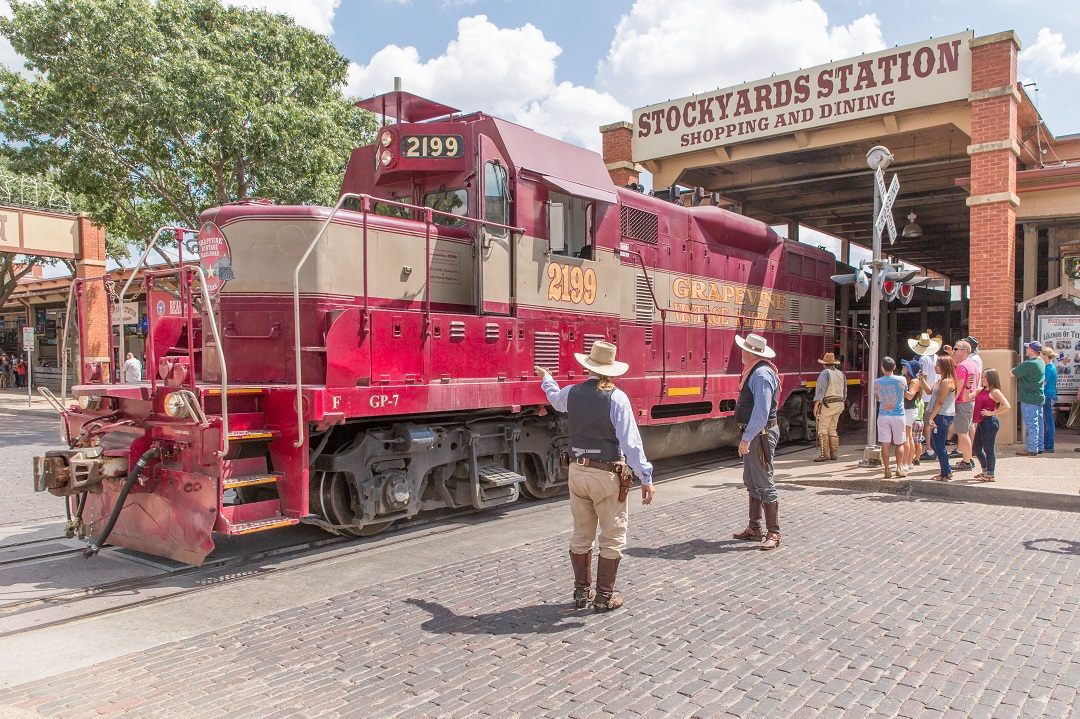 Step into the past. Serviced by two vintage locomotives, the railroad is a must for any train enthusiast. “Puffy,” the oldest continuously operating steam engine in the South, and “Vinny,” a 1953 GP-7 diesel locomotive, chug along the track, carrying passengers looking to travel in style.

PLEASE NOTE: Due to excessive freight train traffic along the Cotton Belt Route, the Grapevine Vintage Railroad’s Trinity River One-Hour Train Excursion originating in the Fort Worth Stockyards will operate on a day-to-day basis.

These excursions will take place dependent upon the arrival time of the Cotton Belt Route train to Fort Worth and tickets will be sold on a walk-up basis ONLY.

Tickets will be available at 1pm on Saturdays & Sundays, in the Stockyards, on a walk-up basis only.

Unfortunately, the excursion is subject to cancellation or delays due to unforeseen freight train traffic and without advance notification. We apologize for any inconvenience.

Originates at the Fort Worth Stockyards
Operates most Saturdays and Sundays between late February and mid-November.
Between May 29 and August 14, Friday excursions will also be available.
2:45 PM – Boarding Begins (approximate)
3:00 PM – Departs (approximate)
3:45 pm – Arrives Back at Stockyards Station (approximate)
Please Note:  Passengers do not de-board the train during the ride.  The train will reverse direction on the tracks to return to the Stockyards.
This excursion does not travel to Grapevine.
Tickets only available for purchase at the Stockyards Station Ticket Booth

Cotton Belt round trip from Grapevine: $26 for first class and $18 for touring.

Trinity River Excursion: $12 for first class and $10 for touring.

For additional questions on Monday through Friday, please contact 817-410-3185.

Please note that schedules – including departure times, return time, and days of operation – are tentative and are subject to change based on freight train delays, federal track maintenance, holidays or weather related closures. While the GVRR makes every attempt to adhere to posted schedules, please understand that delays in arrival times or sudden cancellations of a trip are beyond our control.